What follows is the text of an article written by Lewis H. Arends Jr. that appeared in the Statesman-Journal (Salem) on March 8, 1986.

MONITOR — The small, white country church has stood as a sentinel at the Barlow and Monte Cristo crossroads for more than 90 years. Now called the Nidaros Community Church, it will dedicated as locally owned at a 4 p.m. Sunday service.

The church originally housed a congregation composed of Norwegian Lutherans who homesteaded around this south Clackamas County community. The congregation was incorporated in 1873 and met in various schools until the church was built in 1893. Members decided on the name Nidaros in remembrance of the famed cathedral of that name in Norway, dating from late in the 11th century.

Margaret Doran, who is studying the church’s history with Vera Gehrman, said preaching was in Norwegian for many years. She said records from the 1920s show that choir members had to be able to speak Norwegian. Other records from the 1940s indicate separate services were then held in English and Norwegian.

The church was closed from 1957 to 1959, after the Monitor sawmill burned. Many members of the congregation were thrown out of work and moved away, Doran said.

A retired Methodist minister’s desire to preach again led to reopening of the building as a non-denominational community church in 1960, Doran said.

The Rev. Pierre Smith, Marquam, who had often driven by and seen the empty church, surveyed neighborhood interest in reopening the church if he would promise to preach each Sunday. He found sufficient interest to gain him a lease for $1 a year.

Smith was slowed by a stroke in 1962 and turned over preaching duties to a Mennonite, the Rev. Henry Beutler, Pratum. Beutler stayed until 1968, when he recognized the congregation had grown to the point that it needed a pastor who lived in the area, Doran said. 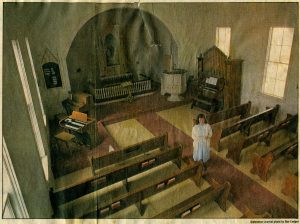 The non-denominational Village Missions has helped provide pastors to 300 congregations in the United States and 75 in Canada, Wiseman said.

Shortly after Wiseman came here, he said, the American Lutheran Church offered to sell the building and property to the church board for the $72,000 appraised value. Since the small congregation didn’t have much money, the pastor suggested an appeal for donation of the property.

The American Lutheran Church finally offered to let the community group have the property for about $3,000 — back taxes and interest assessed against the property when it was inadvertently listed on the tax rolls for a time.

Doran said the congregation is delighted to obtain title to its church. Members have performed upkeep for years, she said, but ownership is expected to encourage improvements to the facilities.

The church obtains its water supply from neighbor Irma Rushold across the road. It has no indoor toilets, but has a portable chemical toilet near the no-longer-used outhouse.
In addition to water and sewage improvements, Doran said Sunday school classrooms may be added someday. The property includes a separate church hall building, constructed in 1910.

The members are proud of the 19th-century features of their church, Doran said. These include embossed tin plating, which covers the walls and ceiling; a preaching stand, which sits on a pedestal; and the original church bell, which is rung every Sunday morning.

World War II civil defense officials gained church permission to ring the bell in case of an attack. A platform from which to spot enemy airplanes was placed in the tall trees that stood at the rear of the property, Doran said.

The large Mason & Risch organ, from a manufacturer in Worcester, Mass., is said to have come around the horn of South America before the Panama Canal was built, she said. It originally was located in a Salem church, but was installed in the church here in the 1940s.

Another favorite story about the church, Doran said, involves repair of its picturesque weather vane three times in 10 years after it was regularly used for someone’s rifle practice. The fourth time repair was needed, the vane was put in storage because the repairman refused to climb the steep bell tower again.

The congregation meets for regular services at 11 a.m. and 7:45 p.m. Sundays and 7 p.m. Wednesdays. Sunday school is at 9:45 a.m. Special services are held each year on Thanksgiving and New Year’s Eve, Doran said.

After Sunday’s celebration of local ownership, the congregation and guests will have a potluck dinner at 5:30 p.m.